We meet in a popular café in the East Village, one block from the Theater for the New City where Laia presents "Garden of Delights", to chat about her career as a filmmaker and video artist where she merges cinematic arts, dance, music, theater and visual arts. 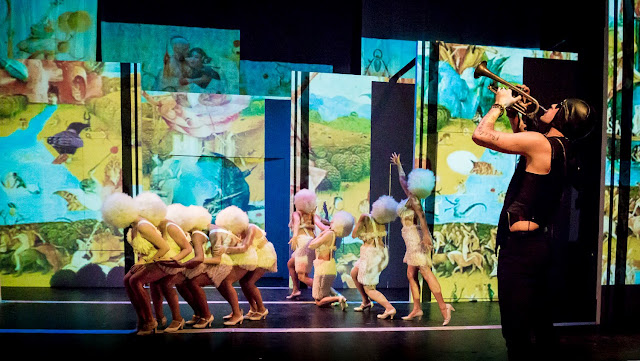 So many people have said, wherever they see my work implemented in a short-film, video-installation or multimedia theater play, they always see something that is more or less a signature, a language or something particular that identifies me.
I think it is the cinematic method, whichever discipline I approach, merging different languages and creating something that reminds us of notions of IDENTITY, and is still figurative, and has composition. In my work I'm looking for symbols and conceptual images. There are a lot of mental descriptions, ideas and dreams becoming objects. I mean, all objects are more than what first meets the eye. So yes, I think there is a signature; the symbolism, the metaphoric and the visual poetry that kind of defines my work.

Also Jennifer Dunning from New York Times thinks Cabrera has a unique voice: "I'm familiar with Ms. Cabrera's work and have been impressed with the seemingly instinctual feel of her work. One recognizes her individual artistic voice even as it seamlessly enriches the choreographic whole. Ms. Cabrera is a deft multimedia artist whose talents would be of great use to American choreographers in general...
IDENTITY has been a long topic of research in my previous work and is still one of my major focuses.
I have already started back in Barcelona with "Neutral Identities", which is an exhibition-interactive-performance-installation. We won the KrTU Young Creators' award that gave us this opportunity to grow and invite other artists to think about identity for this project.
We transformed it into an international collaboration and created an exhibition to present in different museums and cities that, back in the 90s weren't as frequented as nowadays.
From there on, I think in all my films and video installations, there has always been themes of time, memory, choice, beauty, desire, micro and macro and the transitory nature of life and our intent to grasp, capture the instant... all the different levels of the mental journey of identity.

She already mentioned KrTU Young Creators award, but Laia Cabrera is the recipient of many awards including Conca Grant and Kodak&Color Lab award for Best Cinematic Film for "Under Influence". She also directed "Invisible", "Singularity", "Is There an Edge of Belief?", presented in festivals worldwide. Award-winning writer and composer, she also edited "Cachao" with Andy Garcia (PBS's American Master) among other films.
Her artwork includes traditional and experimental filmmaking, multimedia theater and installation performances "Garden of Delights" (Theater for the New City - NY), "Mapping Möbius" and "Landscapes of the Soul" (La MaMa - NY), "Resonant Streams" (Saint John the Divine,-NY), "Claim your Place", "Playing Equality", "Walk-Pasa-Bouge", and "Shifting Gaze" performed in the US and Europe. 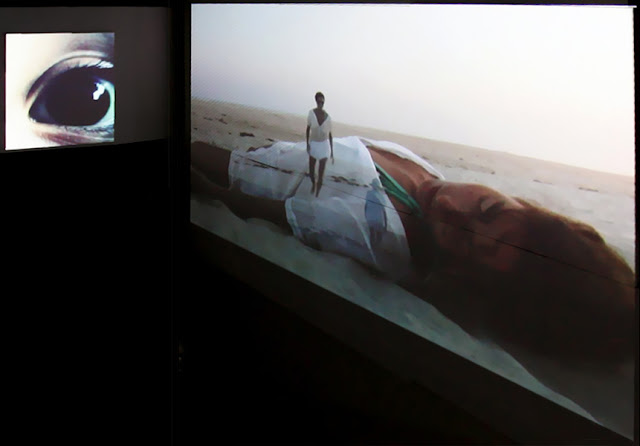 All my works, since 1997 when I arrived in New York, have been produced here but have always had the intention of reaching out to Spain or Europe in general. A lot of the pieces we produced in the last years were either premiered or performed in Spain.
THERE IS ALWAYS THIS WILL TO CREATE THE BRIDGE, to be able to stage at home. One of my last pieces "Shifting Gaze" premiered in Times Square, New York for the "Spain Art Fest'10" and has been presented at "Region Ø Latino Video Art Festival of New York" and screened in different venues in the US, Europe and South America. My film "Singularity" inaugurated the International video animation festival "Animac" in Spain and another "Is there an edge of Belief?" went to the International multidisciplinary art festival "Jaen en Femenino" and the Biennal Internacional ULA 2010, Mérida, VENEZUELA. Recently, we performed in Belgium and France with our two latest video performance installations.
And so far, I'm very happy with the work that the Spanish Consulate is doing here, helping, connecting and promoting the artists here and there. They are supporting the notion of being a Spanish artist abroad, without that geographical limit.
I studied cinema in Barcelona, I was really happy, I had amazing teachers such as Román Gubern, and co-directed a film research project with Josetxo Cerdán but it was really academic and I always felt that it needed something more. Then two things happened at the same time that directed me to New York: suddenly, one of my closest friends was studying here and at that time I was involved in a research project, in an international exhibition and we had to travel to New York to meet some of the artists; and when I arrived to New York I felt creation was more hands on, there was something that made it possible to do projects, not only thinking, writing and conceptualizing them, and it was important for me to step forward. I was fortunate to meet the right people in the right time and after two years I decided to stay here and co-create with Maria Litvan the film and theater Company Vertiginosas islands producing film and theater plays.
I'm very happy to be enriched and challenged by people from all over the world, with different mentalities, cultures and disciplines. I understood that here, if you want to do a project, you will always find someone willing to collaborate. Maybe they are not the ones you thought, but it really works.

Currently she is the creative director of LAIA CABRERA & CO, co-founded with French visual artist Isabelle Duverger, an international team of film, music and visual artists producing a wide range of multimedia projects as "Shifting Gaze" in collaboration with musician Erica Glyn, "Walk, Pasa, Bouge" in collaboration with Brussels-based company Lorrojo, a video dance film "untitled" with dancer and chorographer Catherine Correa among others.
She is a long time collaborator of The New Stage Theatre Company, LiquidBody Media, Movement and Dance, member of the Board of Director of Topia Arts Center, Adams, MA and an advisory board member at the Fashion Institute of Technology (FIT) and director of their annual film documentary.
Laia plays with music, video, storytelling, dance, photography, theater, visual arts... to create a new visual world. Let's check some quotes about her work: 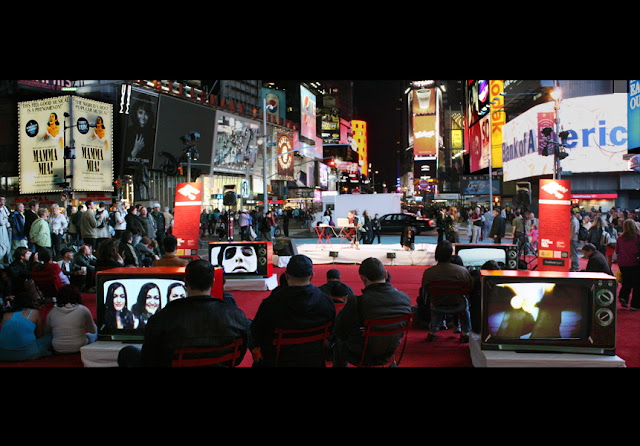 I like Downtown, probably because it is more European... I like the neat cafes, the small places, and the life that the streets have. I find it very exciting to see the spontaneity and the extravaganza that the city has. You can find amazing things in very small places. You always have to be open and challenge yourself to be shocked, surprised and to learn and prepare, not to worry about the label because anyone can bring you something new and inspiring.
If you come to New York it is very important to remind yourself of the reasons you came.
Keep fighting; it is very easy to get distracted from your goal. The city is challenging in many aspects and sometimes you can get tired but IT'S WORTH IT. Probably at the beginning you can be fascinated and at the same time disillusioned because it can be tough.
But keep your goals, keep fighting because is really rewarding in sense of energy, spirit and inspiration.